Khloe Kardashian and her famous brood of siblings take more than just business advice from each other.

And the 36-year-old Good American founder seemed to take a page from half-sister Kylie Jenner‘s book as she debuted an intergalactic spandex suit very similar to the Pierre-Louis Auvray one Kylie had worn last month.

The reality star showed off her famed curves as she self-admittedly lived out her ‘avatar’ fantasies, just a few weeks after her body image was scrutinized after an unretouched photo made its rounds on the internet. 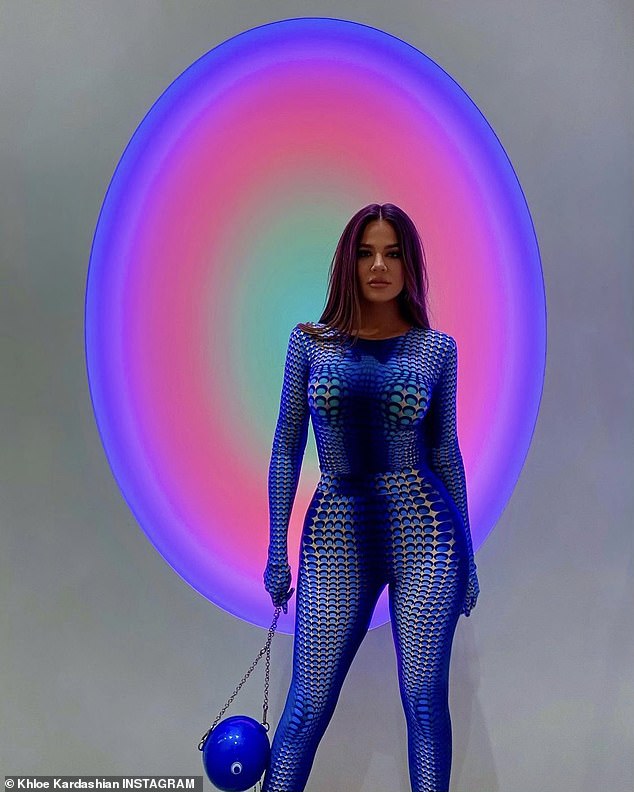 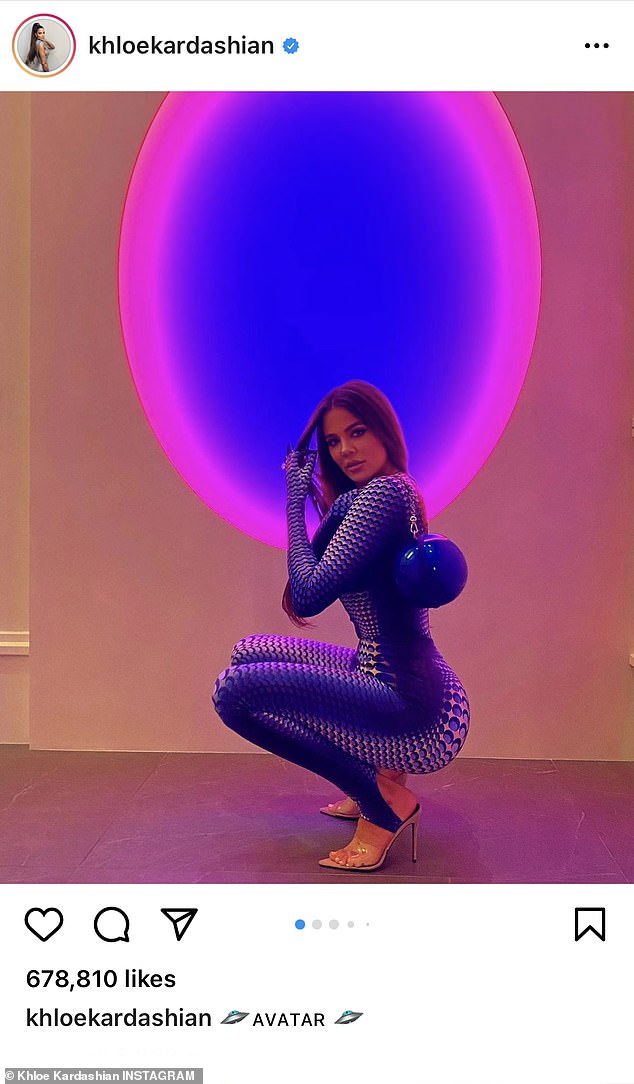 After revealing her interest in UFOs on the most recent episode of Keeping Up With The Kardashians, Khloe seemed to be sending a message with her attire.

The mom of one posed up a storm against a James Turrell piece that proved to be the perfect backdrop for the out of this world photo shoot.

The blue jumpsuit came with built in gloves and was adorned with cascading circles that spanned the entirety of the garment.

When Kylie debuted a very similar jumpsuit last month, Khloe had commented ‘I’m borrowing this. Ok bye,’ and it seemed she got her wishes granted.

She accessorized with a pair of clear heels and an ‘evil eye’ blue ball purse to complete the statement look, while also flashing that large sparkler on her left finger.

Khloe worked her angles in the carousel of images and flaunted that famous backside in one particular snap.

And later she was seen cozying up to her equally stunning siblings as they enjoyed a girls night out — later making their tight-knit bond known as she called them a ‘sister gang.’

She had confessed in her body image related statement on April 7 that she was tired of being referred to as the ‘fat sister’ and being scrutinized for her figure, after an unretouched photo of her in a leopard bikini surfaced online.

BEN AND JEN HANGIN’ OUT IN MONTANA TOGETHER!!!

Jill Biden Sends Michelle Obama Her Condolences After Death of Family Dog Bo: ‘My Heart Is with You’

ABOUT US
We are a group of volunteers dedicated to pioneering ubuntu, inspiring a sense of ownership and belonging thereby creating a platform for all inclusive, progressive exchange of ideas and interaction. We believe in development, stability and unity! We are #SmartEagles.
Contact us: smarteagleszambia@gmail.com
FOLLOW US
MORE STORIES